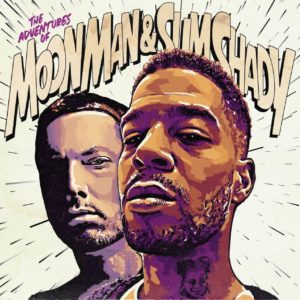 Kid Cudi and Eminem deliver the collaboration you didn’t know you needed with “The Adventures of Moon Man & Slim Shady.”

Two hip hop powerhouses have joined forces to deliver a single of epic proportions. Earlier this week, it was announced that Kid Cudi and Eminem were releasing their brand new collaborative single, “The Adventures of Moon Man & Slim Shady.” The track follows celebratory releases from both artists including Em’s Music to Be Murdered By and Cudi’s last to tracks, “Leader of the Delinquents” and “The Scotts” with Travis Scott.

On the head-bobbin’ beat produced by Eminem and Dot Da Genius, you’ll find both artists taking their time lyrically to unravel their personals tales. In true Eminem fashion, the Detroit emcee takes a jab or two at some celebrity figures, so check out “The Adventures of Moon Man & Slim Shady” and drop your thoughts in the comments.