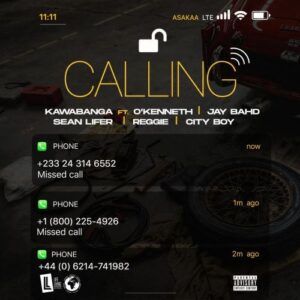 Kawabanga – Calling (feat. O’Kenneth, Jay Bahd, Sean Lifer, Reggie & City Boy). Once again, Kawabanga managed to put together the perfect partnership to churn out another Asakaa classic a year after putting out the first one which kickstarted the dominance of the genre in the music industry. Kawabanga didn’t follow Akatafoc with another bang-up with the Asakaa boys but instead dropped a single dubbed Broke niQQas is sick and made appearances on several Drill songs.

This time around, He included Sean lifer and City Boy to the initial list that he churned out Akatafoc which included Jay Bahd, O’kenneth and Reggie. Instead of O’kenneth doing the hooks, Kawabanga took that role at heart whiles the rest dropped their verses on this street anthem dubbed calling.

The song reflects their expressions about the comments getting passed about them whiles giving everyone pints of what they think about these comments as well. An all-rounded record stuffed with the perfect replies, clapbacks, insights, appreciation and a whole lot of communicative elements worthy enough to get message to everyone out.