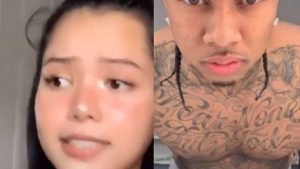 Just a few days following his nude photo leak, Tyga is back with an alleged sex tape with TikTok star Bella Poarch.

The two are being linked because, according to fans, a sex tape has leaked featuring Tyga and Bella Poarch getting intimate. However, there is limited evidence to support the video’s existence.

Tyga’s subscribers on OnlyFans aren’t saying much about how they got word of the clip, but Twitter is still blowing up about this. 19-year-old Bella Poarch has a massive following on TikTok, boasting over 36 million followers, but she’s been in the news because of her supposed connection to Tyga.

Considering the fact that his nudes were just leaked, it isn’t a far cry to believe that a sex tape is also floating around but, given the fact that nobody can seem to find the video, it looks like this may just be hearsay.

Tyga has gotten significantly more raunchy in recent weeks, sharing straight-up nudity on his Instagram page and faintly blurring out the images to ensure he doesn’t break the platform’s guidelines. He has also been named as one of the top-earning celebrities on OnlyFans, actually sharing nude images with his fans.

Details : Cardi B Accused Of Lying About Age and Having Baby In 2011
Eminem Lists Down His Top 17 Greatest Rappers Of All Time
Advertisement