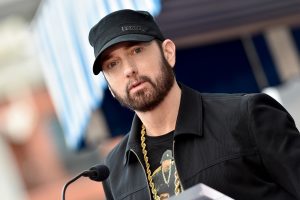 Eminem Lists Down His Top 17 Greatest Rappers Of All Time. Eminem Has Created A List Of The Seventeen Rappers He Considers To Be The Greatest Of All Time.

Marshall Bruce Mathers III, a creative who is credited as being a pivotal figure in the popularisation of hip hop in Middle America, has managed to break major racial barriers with his work since breaking into the mainstream and becoming one of the most commercially successful rappers of all time.

“If people take anything from my music, it should be motivation to know that anything is possible as long as you keep working at it and don’t back down,” he once said in a quote that typifies his approach to music.

“Nobody likes to fail. I want to succeed in everything I do, which isn’t much. But the things that I’m really passionate about, if I fail at those, if I’m not successful, what do I have?” he added. “People can try to reinvent themselves.

I don’t think you can really change who you are, though, because who you are is pretty much where you came from and what you’ve done up to now.”

Mathers, the ‘Rap God’ himself, one who is considered by many to be the greatest of all time, has never been shy to discuss the music that has shaped his own creative vision, often paying homage to some of the greatest. Recently, when a fan who was creating a YouTube video asked: “Who is the greatest rapper of all time?” Eminem was on hand. Somewhat surprisingly, the rapper actually replied. “For me, in no particular order… Toss up between Wayne, Pac, Royce, Jay, Redman, Treach, G. Rap, Biggie & King Crook…. [sic],” he tweeted.

This, of course, is not the first time Eminem has referenced some of his contemporaries and, in the years gone by, he has often cited some of the icons of the genre as part of his own music. Famously, as part of his 2002 song ‘Till I Collapse’, Mathers raps: “I got a list, here’s the order of my list that it’s in/ It goes, Reggie, Jay-Z, Tupac and Biggie/ Andre from Outkast, Jada, Kurupt, Nas and then me.”

Somewhat surprisingly though, Eminem failed to include the likes of Snoop Dogg, Ice Cube, 50 Cent or any members of the pioneering group Wu-Tang Clang.

Elsewhere, despite being the major figure in the breaking of racial barriers when it comes to white rappers, Eminem failed to include any in his list. It has also been noted that the rapper decided against including any female musicians as part of the selection.

See Eminem’s full selections, below.
Eminem Lists Down His Top 17 Greatest Rappers Of All Time ;

Details : Cardi B Accused Of Lying About Age and Having Baby In 2011

Cardi B, Bella Thorne And Other Celebrities Making Unbelievable Money On Only Fans