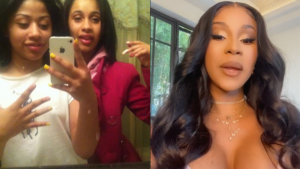 This has been an extremely busy summer for Belcalis Marlenis Almánzar, better known as Cardi B. From having the song of the summer with her latest release featuring fellow rapper Megan Thee Stallion, WAP, to her recent divorce filing from her soon to be ex-husband Offset, Cardi B has been one of the most talked-about celebrities in the news cycles. And now, some Nicki Minaj fans. affectionally known as “Barbz”, have seemed to pull up some old tweets that may allegedly blow the lid off of some of Cardi’s personal information.

I’m kicking off my birthday weekend by announcing I am officially dropping my first ever Reebok x Cardi Footwear Collection on 11/13!! As my birthday gift to my loyal fans I’m dropping limited pairs TONIGHT at MIDNIGHT EST on Reebok.com. #ReebokxCardiB

The Cardi and Megan collaboration released over the summer to massive rave reviews, breaking records for the largest opening streaming week for a song in US history as well as debuting atop the Billboard Digital Song Sales, Streaming Songs, Hot Rap Songs, and Hot R&B/Hip-Hop Songs charts. The song didn’t come with its share of criticism as well, with conservative pundits publicly scrutinizing it, however that didn’t quell the song’s growth, as it debuted at the number one spot on the Billboard Hot 100 and stayed for four weeks. At press time it is currently at the number three position on the chart.

Cardi B has much more to celebrate as last night the “Press” rapper celebrated her 28th birthday with a wild birthday party in Las Vegas. She was joined by fellow artist friends Megan Thee Stallion, Gunna, Queen Naija, Teyana Taylor, and Floyd Mayweather to help her ring in her birthday festivities. Also in attendance was her estranged husband, Offset, who seems to be trying to make amends with Cardi.

Besides surprising Cardi with a billboard on Sunset Blvd for her birthday, the “Clout” rapper gifted her with a brand new Rolls-Royce Cullinan, valued at $330,000 during the festivities. The car also came equipped with a ready-made car seat embroidered with their daughter Kulture’s name. Despite the divorce filing, the pair looked quite close as they even shared a kiss and lap-dance. Chants of “take him back” rang off as Cardi accepted the lavish gift from her husband.

The moment should be a joyous occasion, but the Barbz would beg to differ. It seems as though they’ve banded together and discovered that the “Bodak Yellow” rapper may be allegedly lying about her age.

Some tweets have resurfaced that claim to be about 8 years old and also allegedly from Cardi’s sister, Hennessey’s Twitter account. They would also suggest that Belcalis would actually be in her mid-thirties.

On a tweet that dates back to Christmas of 2011, Hennessey allegedly tweets “omg bacardi woke me up. Lol your [sic] 23 and your excited [sic] for Christmas? Really?” If true, then according to the tweet it would place Cardi’s age at 32.

Not only does the account suggest that Cardi has been lying about her age, but that she was once pregnant back in 2011 as well. The same account has pics of the rapper in the hospital as well as holding a baby in January of 2012. According to Cardi, her first child is Kulture with her husband Offset.

No comment has been made from Cardi or her team as of yet. Details : Cardi B Accused Of Lying About Age and Having Baby In 2011.

Cardi B, Bella Thorne And Other Celebrities Making Unbelievable Money On Only Fans

Cardi B Files For Divorce From Offset: Report

Continue Reading
Advertisement
You may also like...
Related Topics:Cardi B, Details : Cardi B Accused Of Lying About Age and Having Baby In 2011