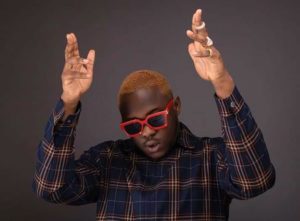 Video : Medikal Seen Chilling With His Friends Hours To His Wedding. Celebrity couple, Samuel Adu Frimpong popularly known as Medikal and actress Fella Makafui decided to take things to the next level after close to two years of dating.

When news broke about their marriage, many doubted and thought it was one of their publicity stunts even after Medikal confirming it.

But from the look of things, it is not a stunt as perceived but a reality bound to happen soon.

Their wedding is scheduled to happen today, 7th March, 2020 at East Legon Adziriganor per their engagement flyer the surfaced on the net.

Yesterday, Fella Makafui and some few friends had her bridal shower ahead of her wedding today, an event which has become a norm of late for brides to be.

The groom and his friends also often have a bachelors party whereas the ladies have their bridal shower.

Medikal, however didn’t have a bachelors party but rather a birthday party for his Dad, Dada Spankey.

In a video sighted online, Medikal was seen with his friends and Dad as they celebrated his birthday in harmony and joy.

Check the video out below ; Video : Medikal Seen Chilling With His Friends Hours To His Wedding.

#MediFella : Fella Makafui and her bridesmaid chilling ahead of her engagement on Saturday. (Watch)