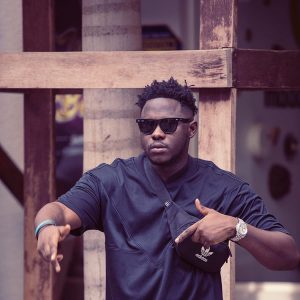 A few weeks ago, social media personality and member of AMG, Showboy alleged that Medikal was selling out on his record label by starting his own record label ‘Beyond Kontrol’.

READ: Medikal reveals why he named his beautiful newly-born baby Island
Speaking on the Myd-Morning Radio Show with Rev Erskine on Y107.9FM, Medikal stated that he remains loyal to Criss Waddle and AMG Business even though he has started his own label.

“I can’t leave AMG. If I leave AMG, it’s like I’m leaving myself. I grew up with AMG. Myself and Waddle, we built AMG. Waddle being my boss came up with AMG and he put me on so after putting me on, I can’t just leave because it’s something that we built together,” he said.

READ: I gave Eno Barony free Hype by beefing her-Medikal
Medikal also added that Beyond Kontrol is his own movement or record label that he is starting aside AMG Business on which he will sign new artistes, so there will be both AMG Business and Beyond Kontrol with Medikal in it.

Continue Reading
Advertisement
You may also like...
Related Topics:Medikal