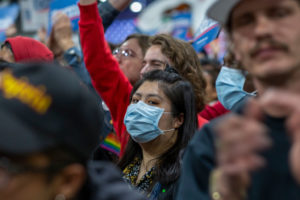 A state of emergency has officially been declared in Los Angeles County after six new cases of the virus appeared in just 24 hours. What began as an insignificant disease in Wuhan, China at the end of last year has now reached new levels of massive proportions as confirmed cases of the coronavirus have reached over 90,000 patrons worldwide.

Countries like Iran and Italy have struggled immensely to contain the virus and now, United States health officials fear an extensive outbreak within the nation’s borders is imminent. Now, Los Angeles County might be the next major metropolitan city to feel the effects of the deadly virus.

According to ABC News, six Los Angeles residents tested positive for the coronavirus in a span of just 24 hours. One of the six people infected was a medical screener at Los Angeles International airport (LAX) who began to develop flu-like symptoms, visited his doctor, and was diagnosed with the disease.

Another citizen allegedly contracted the disease on a California cruise during a trip from Feb. 11-21. According to the cruise line, the Sonoma County resident was experiencing atypical ‘gastrointestinal and cardiovascular symptoms’ beforeofficially testing positive for the coronavirus.

Last week, the first official United States coronavirus death struck Washington. Since then, ten more U.S. citizens have passed away from the virus, bringing the official stateside death toll to a total of eleven civilians.

While a vaccine has supposedly been developed for COVID-19, the virus has the potential to send the nation into a panic if it is not promptly contained.

Check out NBC News official report on the six new cases of the coronavirus that has officially sent Los Angeles County into a state of emergency in the video provided below. Los Angeles Declares State Of Emergency After Six Coronavirus Cases Arise In 24 Hours.

Visit basextra.com for more entertainment news across the globe