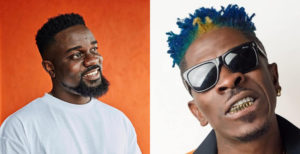 Shatta Wale got furious after Sarkodie’s legendary producer, Possigee claimed in an interview that the BET award winner has featured a foreign artiste way bigger than Jay Z.

In his submission on Possigee’s claims, Shatta took to Twitter to blast Sarkodie and his entire fanbase, calling the rapper broke and a braggart.

He even went to the extent to threaten that he had a list of all the slay queens Sarkodie has chopped behind his wife, Tracy Sarkcess which he will release soon.

Sarkodie has been quiet over Wale’s numerous rants for some time leaving the fight for his fanbase to fight on his behalf but in a response, King Sark indicated that he thinks less of what Shatta Wale is doing.Sarkodie Finally Replies Shatta Wale’s Social Media Rants (Screenshots).

Sarkodie Celebrates Tracy On Her Birthday with Romantic Video (Watch)

Strongman Reveals Why He Still Haven’t Collaborated With Teephlow

Continue Reading
Advertisement
You may also like...
Related Topics:Sarkodie