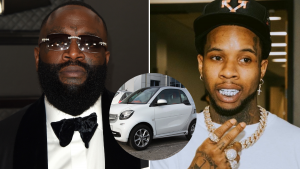 Rick Ross Continues Trolling Tory Lanez, Disses His Hairline. Rick Ross confirms he’s sending over a Smart Car for Tory Lanez, dissing the rapper’s hairline and continuing to troll him.
2020 went from the best year in Tory Lanez’s career to the absolute worst nightmare in his life.

The Toronto native started off the year by going independent as an artist, also starting one of the most entertaining quarantine shows, Quarantine Radio. He was on top of the world until July, when he was accused by Megan Thee Stallion of shooting her in both of her feet.

A number of high-ranking industry officials, as well as artists, have denounced Tory Lanez because of his involvement in Meg’s shooting, swearing to never work with the rapper again. Rick Ross is one of those people, trolling the artist for his height and actually ordering a brand new Smart Car for Tory just to troll.

After several weeks had gone by, Tory had the nerve to jump in Rozay’s comments and ask where his car delivery was, which the Maybach Music boss had the courtesy to respond to.

Heading out to his driveway, Rick filmed a video and said: “Rise and grind. I just got word Tory Lanez is waiting on his mini car. Well Tory, I apologize. I’m getting it wrapped for you. I gotta go tell the man that’s wrapping it to push their hairline back six inches. That may put another week on it baby, but I got you, Tory. Come on, Tory!”