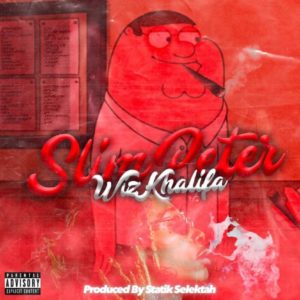 Wiz Khalifa – Slim Peter. You already know when Wiz Khalifa drops a track, it’s time to catch a vibe. The military brat has already shared that he’s releasing a new set of tunes soon with his Big Pimpin project, adding that he plans on sharing one half of the project one week and the other half at a later date. In the wee morning hours od Wednesday (July 8), Wiz released his latest single “Slim Peter,” and while we aren’t too sure whether or not this track will make it’s way to Big Pimpin, we can only hope.

With Statik Selektah behind the production, “Slim Peter” was fitted to be a breath of fresh hip hop air in the middle of this hot July week. Wiz Khalifa pairs the title of the track with the single’s red-adorned cover art that shows, well, a slimmed-down Peter Griffin from Family Guy as he’s smoking a blunt. Check out “Slim Peter” and let us know if you’re excited to hear what Wiz Khalifa has cooked up on Big Pimpin.