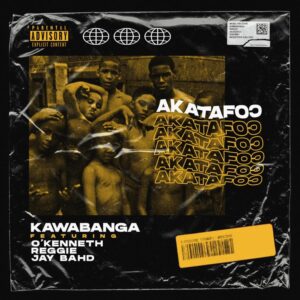 Another song is making waves on social media with the same drill sentiments titled ‘Akatafoc’. This is a song by Kawabanga featuring O’Kenneth, Reggie & Jay Bahd , all based in Kumasi.

Without doubt , it’s evident there’s a Pop Smoke influence in there. The demise of American rapper , Pop Smoke exposed a lot of people to his music out here in Ghana. His highly recognizable worldwide hit ‘Dior’ became a scheme for rappers who wanted to join the drill culture. Till date , fast-rising rappers not just in Ghana are churning out freestyles with verses laid on the instrumental for ‘Dior’.

With a voice as soothing as heavy duty industrial machinery laced with a tense beat , Kawabanga and his colleagues are embarking on a mayhem with their new release ‘Akatafo)’. The word ‘Akatafo)’ is a commonly used lingo in Ghana to label someone who loves to dress in a funky style .

Kumasi is the new home for drill music. The successful releases of the two Kumasi-made drill joints will impact the style of music made out there thus creating an avenue for all the rappers to give it a shot since its become their easiest way now to rise to stardom.

Take a listen below before it’s too late to catch up with the wave. Kawabanga – Akatafoc ft. O’Kenneth, Reggie & Jay Bahd.