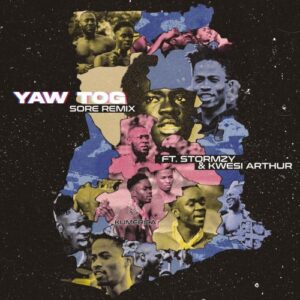 At the end of 2020, Stormzy, the platinum-selling British-Ghanaian rapper, took a trip out to the West African nation to hop on the track’s remix alongside fellow Ghanaian MC Kwesi Arthur. A non-stop onslaught of energy, the “Sore” remix is released officially today with a set of rowdy, amped-up visuals from KooPokuStudios.

To give the Chris Rich-produced track a test-run, Stormzy took to the stage at Ghana’s UPP Festival when he was there on New Year’s Eve. Suffice to say, it went down pretty well.

Yaw Tog is dropping his debut EP, TIME, on March 25, which you can pre-save here. Peep the visuals for the “Sore” remix above, and be sure to add the song to your playlists.