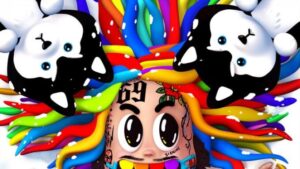 6ix9ine – ZAZA. 6ix9ine clowns Meek Mill in the music video for “ZAZA”. 6ix9ine is back, whether you like it or not. The much-discussed rapper has been teasing his return for the last few weeks, popping back up on social media and proudly proclaiming that the internet was a boring place without him. While we all learned to live without the loud-mouthed Brooklyn rapper, he decided to try his luck and stage another return, coming back with his new single “ZAZA”.

Coming through as promised, 6ix9ine has released one of the songs he previewed last week called “ZAZA”. Unsurprisingly, the rapper also included footage of his altercation with Meek Mill over the weekend, dubbing in, “It was at this moment that he knew he f*cked up.” For much of the video, 6ix9ine parties with a bunch of bikini-clad women, throwing money all over the room and apologizing to their fathers at the end.

Watch 6ix9ine’s official return video below (if you will) and let us know if you like his new song. Do you think he can achieve sustained success in music after everything he did?

ArÐµ you dumb? Where couldn’t I come?
Are you dumb? When you see me, you better run
You got your gun? They caught that n***a lackin’ like a b*tch
They killed your cousin and your man and you still ain’t do shit

Continue Reading
Advertisement
You may also like...
Related Topics:6ix9ine - ZAZA