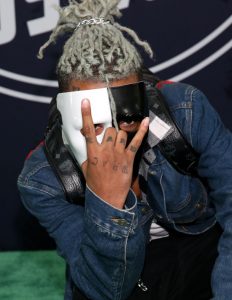 XXXTentacion Sometimes Went Days With No Food Or Talking According To Wifisfuneral. “I think him being so quiet because he would be loud and abrupt,” replied Weef when asked about X’s most unique characteristic. “But, you could tell that that was kind of a disguise from what he was actually kind of going through, you know what I mean? There’s times where I would find him just quiet as fuck. And it’d be the scariest shit ever. Just from sunrise to sundown, quiet. Won’t say a word, won’t speak a word, won’t eat food, won’t go outside to smoke a cigarette. Nothing, nothing at all.”

wifisfuneral admits that he was concerned about the rapper, wondering what was happening in his mind that caused such behavior.

“I would just be curious in my brain,” said wifi. “I’ll be like, ‘Damn bro, what the fuck is he going through in his head? I want to know.’ So I think that was kind of also not really weird, but you never knew what was going to happen. You know what I mean?”

Continue Reading
Advertisement
You may also like...
Related Topics:xxxtentacion