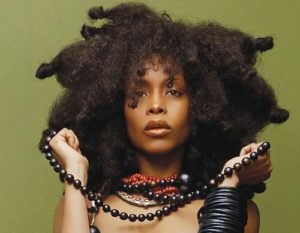 Erykah Badu lets the world know just what she’s working with.
If you try to tie Erykah Badu’s name in with some drama, she’ll make sure to set the record straight. People have been making quite a few jokes about Jada Pinkett Smith ever since August Alsina stepped forward to say that he was in a years long relationship with the actress—with the approval of her husband Will Smith. The rumors have been swirling for some time now, and after Alsina’s statements about being wholeheartedly in love with Jada went viral, people couldn’t help but draw comparisons to her close, loving relationship with her good friend Tupac Shakur.

One meme caught the attention of Erykah Badu after a side-by-side photo of the singer and the actress made its way to Twitter. “If ‘This P*SSY will F*CK yo life Up’ was a person,” the meme read. The person who tweeted it added a caption that said, “Y’all better leave @fatbellybella outta this lol.” Ms. Badu chimed in.

“How I get in it?” the singer questioned, before schooling people on what she has going on between her legs. “I got Midas p*ssy. My p*ssy give you 3 wishes. My p*ssy put you on the Forbes list. My p*ssy is the fountain of youth. My p*ssy sold out in 9 minutes. My p*ssy cure ailments. My p*ssy Bk on sale FRIDAY!! Y’all trippin. Google me. http://BaduWorldMarket.com Ho.” Check it out below.

How I get in it? I got Midas pussy. My pussy give you 3 wishes. My pussy put you on the Forbes list. My pussy is the fountain of youth. My pussy sold out in 9 minutes. My pussy cure ailments. My pussy Bk on sale FRIDAY!! Y’all trippin. Google me. ???? https://t.co/HXU4AWSGPn Ho. https://t.co/in0K98tdNR

Continue Reading
Advertisement
You may also like...
Related Topics:Erykah Badu

6ix9ine Reads Aloud The Last DM He Received From XXXTentacion
Screenshots : Check Will Smith’s Furious Reaction To An Entanglement Joke On Instagram
Advertisement