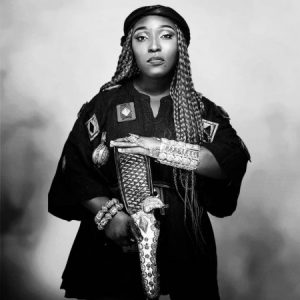 Eno Barony Crowned Best Female Rapper In Africa At The 2020 AFRIMMA. A lot of Ghanaian acts got nominated at this year’s African Muzik Magazine Awards and Music Festival (AFRIMMA), but only Ghana’s very own Eno Barony’s name was cited as a winner to save our industry from Disgrace.

For someone who have has been sidelined by her own country, it’s a great feat to be recognized as the best female rapper on the entire African continent. Her quality bears no question marks as of today it’s hard to tell whether she got a competition among her counterparts.

Her focus is projected on becoming the best rapper in Africa and not just best female rapper. She holds the capabilities to body every male rapper who will jump on her and so far a lot of Ghanaian male rappers have been avoiding her to save themselves.

Notable among them is Sarkodie who uptil now have refused to jump on a song with the Queen of kings dubbed as Yaa Asantewaa by the Ghanaian music scenes. With this great achievement she deserves all the support at the same level we channel towards the male acts. Eno Barony Saves Ghana From Disgrace At 2020 AFRIMMA.
Eno Barony Crowned Best Female Rapper In Africa At The 2020 AFRIMMA.

Other Posts : Davido – A Better Time

Read all the latest Ghanaian news from voiceofgh.com

All You Should Know About Buzzing Ghanaian Rapper Sharkels
AFRIMMA 2020: Full List Of Winners
Advertisement