Pure Akan Releases His Second Studio Album “Nyame Mma”. Outstanding Ghanaian recording artiste, Bernard Nana Appiah, known within the showbiz circles as Pure Akan has finally released his long-awaited album titled; “Nyame Mma”. Prior to the release, Pure Akan hinted that the project, “Nyame Mma” will be a gospel album. The album which translates ‘God’s Children’ is a sixteen track project with guest appearances from Ayisi and King Ayisoba.

The body of works which has been in works for close to 3 years comes with a dark and grainy cover with Pure Akan sandwiched by 2 women and 11 children. “Nyame Mma” album serves as the official follow up to his 2017 album, “Onipa Akoma” which earned positive reviews from fans and critics. ‘Onipa Akoma’ has been described as a game-changer in the music industry.

When an event at West Legon briefly hit a snag, patrons sat – yet to be bothered – on the moist freshly cut grass of the Villa Victoria, engaged in hearty chatter while the technicians worked sound equipment to get the show on the road. I looked from a wall I leaned against as Pure Akan, host of the show, took matters into his own hands and tweaked cables behind some of the mixers to ensure that things went according to plan on that Saturday, July 10.

He seemed to know what he was doing; therefore, as a guest who had arrived late fearing he might have missed the event, a heavy sigh was all I could heave. For the fans, it was just another night with their icon who did not fancy celebrity status and was on call to give the guests a treat, even if it meant hitting the stage as a technician who would later re-emerge as the lead artiste, a few performances in.

This challenge with the sound quality at Aboa Concert II would continue throughout the night. However, the intensity with which the audience sang along will have you questioning why they needed a sound system, to begin with. From ‘Mi Sika Duro’ down to ‘Helebaba,’ Kwa Appiah, as he is affectionately called, took the audience on a ride from his early days and a cruise on his first album Onipa Akoma, one of the most-streamed records on Aftown after its release in 2017.

That was the first time many of his fans were given a sneak peek of his new album Nyame Mma. The ice breaker was ‘Mensesa me ho’, and the crowd went wild. The track would later be announced in the fifth spot on the 16-track album, Pure Akan’s sophomore project. ‘Mensesa me ho,’ to wit ‘I won’t change,’ depicts his unwillingness to stray from his originality and roots.

Speaking of which, it may not be too late to reach out to the head of your family, ‘Abusua Panyin’ back in your village, or any culturally eclectic figure you know. Because this collection will challenge everything, you ever knew to be true about the current world as you know it, as against what transpired in the pre-2000s. Basically, it’s a nostalgic body of work.

Akan delves deep into this project as it is themed around the essence of identity, cultural values and norms, which are used to galvanize the bond among indigenes. Right from the top, ‘Agyapade3’ speaks about deep-seated inheritance and resources available to indigenous Ghanaians but are now inaccessible because of inadequate knowledge about one’s roots back home.

‘Hw3 Ade3 Na to Ade3’ gets into how children are oriented and trained in homes where guardians downplay the inculcation of culture, leading to a loss of the fundamental tenets that links a person to their ancestry, a subtle reference at Westernisation of Africans and its demerits.

Nketenkete, the third song on the track, actually gives away the setting for the experience. Pure Akan seems to be telling folklore to children gathered around a fire in a village scene like in the 90s Ghanaian TV show, ‘By The Fire Side.’ On the track, he lists popular games which bonded societies but have been gradually disappeared post-colonialism.

He evokes traditional games such as ‘ampe’, ‘pilolo’, ‘Peele’, ‘Nkro’ and urges the children to stay true to them. It’s a fascinatingly refreshing tune for pre-2000s babies as it outlines fun activities that predated improved technology, which now presents the creeping indoor and screen culture we’re seeing today. 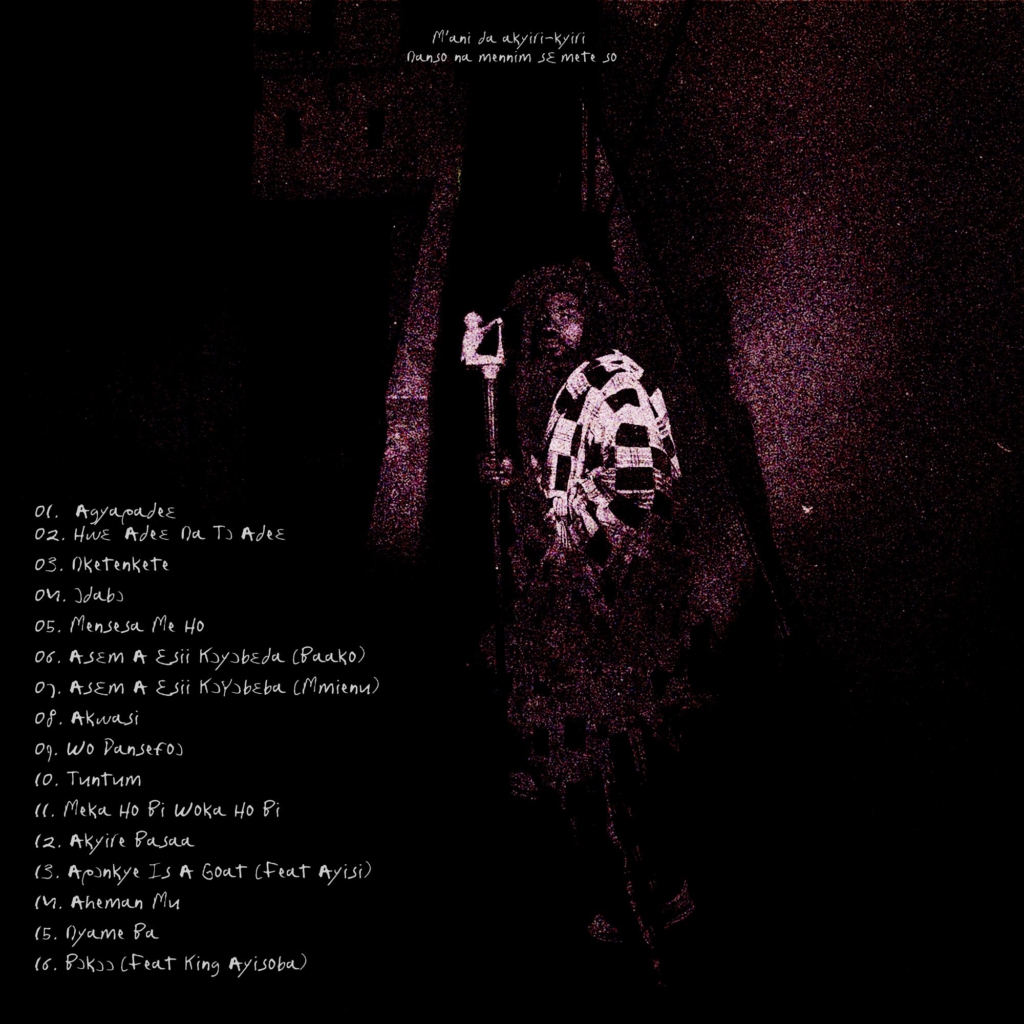 The song’s composition is heavily influenced by legendary Nana Ampadu’s ‘Nketenkete’ in the early 1970s. I don’t remember the last time any contemporary went that far back in time for an original domestic sample.

For a moment, I wondered if Pure Akan has had only recently awakened to the stories of havoc the colonialism wrecked onto the thriving tribes in the precolonial period.

The raw energy with which he attacks the sound and renewed commitment to rectifying the anomalies done by the canker is evident on ‘Aponkye Is A Goat,’ a song that featured silky-voiced, Ayisi.

The song contains probably one of the most powerful verses on any tape this year.

“I’m the stubborn slave that jumped off the slave ship and was left behind. So now I have to protect what’s left and show the way,” is a translation from the actual twi bar.

Profound as it sounds, it visualizes the damage and resources lost from West Africa through the transatlantic slave trade and the need to stop the ongoing brain drain and make the continent the ‘heaven’ that many continue to travel abroad to seek.

This message is reinforced by songs such as Akwasi, Tumtum.

Other songs like ‘Meka ho bi,’ ‘Akyire Basaa’ call out the current generation to play their part in giving society a facelift.

A journey through the album sounds like a piece that African Studies Departments worldwide will adopt as a case study decades to come.

It is rich in local instruments, adages, allusions that go centuries into history and references to activities that will tickle the fancy of even an oldest Ghanaian. But the artiste is far from even 40 years old. Over 90% of the record was produced by TwistedWavex. It takes a godly turn on Nyame Ba. It is No. 15 on the tracklist and talks about an acceptance of the light of God and the phenomenon’s position as the base for all creation.

The song is a deep reflection on the realization that divine power has been placed in the hands of humans from infancy and must be used for good, through impact in the lives of others while making the best out of opportunities.

I kid you not when I say nothing can prepare you for the sounds you will hear on the discography. It comprises sounds of cultural drums, pronounced guitars, burga highlife, and hip-hop. It is occasionally infused with Ashanti originated Nwomkro.

The artistry is well thought-through by observing the skits sandwiching some of the songs like two parts of ‘Asɛm a esii kɔyɔbɛda.’

Another brilliant collaboration that of King Ayisoba on ‘Bɔkɔɔ”.

In the song, the duo urges Africans to persevere in patience and judiciously utilize what is left of the plundering that our forefathers were subjected to during the harsh colonial era.

And oh, ‘morning’ was the only English word I heard on the whole album, let that sink in.

I don’t see this as a mere body of work, but one that teaches valuable lessons – a full historical timeline of a lost people retracing their steps back home. Fortunately, we found the map in these 16 songs.